One of Thomas’ first commissions after his move to London, came from his friend, Fr. Daniel O’Donaghue, then newly appointed Parish Priest of St Mary’s in Wigan.

Having previously been Parish Priest of the Church of the Sacred Heart in Thornton, near Blackpool, he had seen Thomas’ skill first hand in his statue of St Patrick two years earlier. It was no surprise then, that he thought of Thomas again when considering enhancing the decoration at his new parish of St Mary’s. 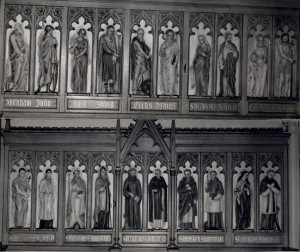 His commission consisted of:

In 1913 came yet another request from Fr Donaghue, this time for a pulpit. Though Thomas did not actually execute the work, he was responsible for the idea, the design and the minutely detailed drawings. He also supervised the task and oversaw the arrangements for its installation.

He was also the Artist responsible for the paintings of the Stations of the Cross. 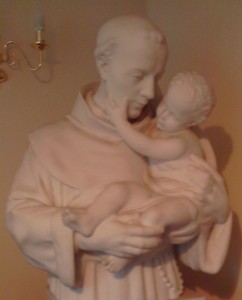 In 1918, before the War had ended, Fr Donaghue contacted Thomas again for another project, this time as a War Memorial. A parishioner, a Mr Arkwright sought to donate a statue of St Anthony to the Church. It was as a result of this, that the marble statue of ‘The Vision of Chateauneuf’ came into being.

St. Mary’s has the biggest single collection of Thomas’ unique and versatile talent anywhere in the country.

Thomas’ work is mentioned in the Revised Edition(2009) of the book by Christopher Martin called ‘A Glimpse of Heaven.’