Thomas was commissioned to make sculptures for a number of memorials after the First World War. Here are details and pictures of these memorials. 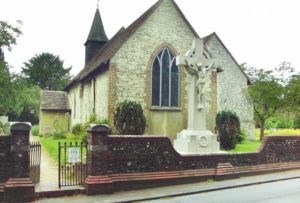 A life-size Calvary figure on a Celtic styled cross in the grounds of an 11th century Church(1918) in Portland stone. 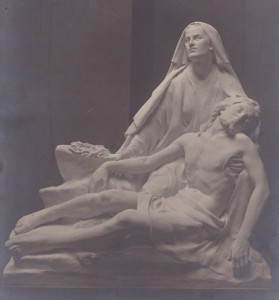 Pieta: A statue of Mary holding the body of her dead son. It was done in 1919 in plaster. It survived the Second World War and the bombing of that part of London. We have no up to date knowledge whether it is still there. 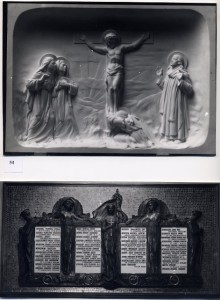 A bronze plaque set in gold mosaic commemorates the soldiers and airmen who died in the Great War(1920). We have no up to date information as to the whereabouts of this memorial. 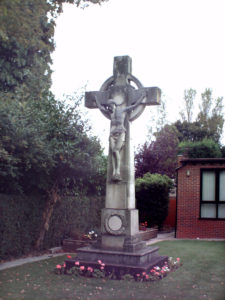 A life-size crucifix in Portland stone(1919). Originally, it was erected facing the crossroads of the Foley and Featherstone roads, but has since been moved to the front of the grounds of the Church.

A full size marble figure of ‘A Vision of Chateauneuf’, ie. St Anthony with the Christ child was done as a war memorial. The request came from the parish priest at the time. This remains in an alcove in the Church where it was dedicated in April 1920. 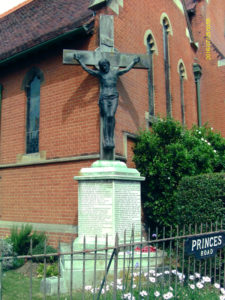 A life size crucifix, the figure in bronze on a teak cross(1919). This was erected with its back to the Church facing the crossroads of Orwell Road and Princes Road. It remains there now.

A large plain cross in Portland stone with a small crucifix on the top and two figures on the cross beam, Mary and St John(1919). 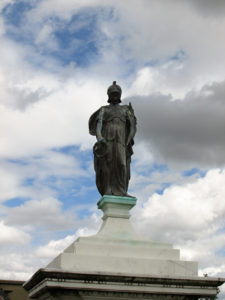 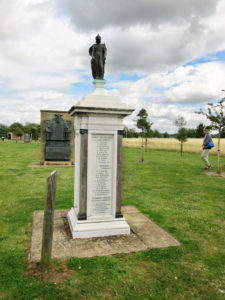 Britannia statue in bronze(approx. 25 inches high) to commemorate the employees of the Company who had perished in the War. This figure was positioned in the lobby of the building and unveiled on Dec 15th 1921. It is now on a marble plinth in the National Memorial Arboretum at Alrewas, Staffordshire.

We use cookies on our website to give you the most relevant experience by remembering your preferences and repeat visits. By clicking “Accept All”, you consent to the use of ALL the cookies. However, you may visit "Cookie Settings" to provide a controlled consent. You can read our full privacy policy here: Read More
Cookie SettingsAccept All
Manage consent

This website uses cookies to improve your experience while you navigate through the website. Out of these, the cookies that are categorized as necessary are stored on your browser as they are essential for the working of basic functionalities of the website. We also use third-party cookies that help us analyze and understand how you use this website. These cookies will be stored in your browser only with your consent. You also have the option to opt-out of these cookies. But opting out of some of these cookies may affect your browsing experience.
Necessary Always Enabled
Necessary cookies are absolutely essential for the website to function properly. These cookies ensure basic functionalities and security features of the website, anonymously.
Functional
Functional cookies help to perform certain functionalities like sharing the content of the website on social media platforms, collect feedbacks, and other third-party features.
Performance
Performance cookies are used to understand and analyze the key performance indexes of the website which helps in delivering a better user experience for the visitors.
Analytics
Analytical cookies are used to understand how visitors interact with the website. These cookies help provide information on metrics the number of visitors, bounce rate, traffic source, etc.
Advertisement
Advertisement cookies are used to provide visitors with relevant ads and marketing campaigns. These cookies track visitors across websites and collect information to provide customized ads.
Others
Other uncategorized cookies are those that are being analyzed and have not been classified into a category as yet.
SAVE & ACCEPT